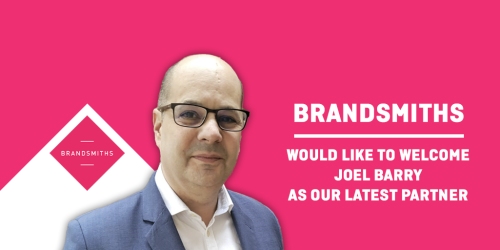 Brandsmiths is delighted to announce that Joel Barry has become a Partner and member of the Senior Leadership Team.

Speaking on his new position, Joel says “I have been intrigued by Brandsmiths’ culture and firm from the get-go and have experienced their tough litigation style, over the years, in cases I had against them. I am very excited to take up this new role and challenge. It’s inspiring to be part of a team that demonstrates such a high level of ambition and incredible growth over a short period of time. I have no doubt this will continue and look forward to helping build on their established trade mark practice.”.

Adam Morallee, CEO of Brandsmiths said “It is great that Joel is joining us as partner. He is someone I have known for years who has developed a great practice. His experience in running one of the most well-known trade mark departments in London is invaluable to a firm like ours, as we seek to develop our position in the market as the go to firm for IP rich businesses.”

Joel is recognised internationally as a global leader in trade marks and has conducted litigation and undertaken advocacy in the UK courts and throughout Europe including before the Appointed Person and the General Court of the European Union in relation to trade mark matters.

The WTR1000 has described Joel as “one of the market’s big dogs… committed to doing a fabulous job for clients” and “…first choice for any trademark protection matter”.